> back to main conference page

We are offering travel and accommodation bursaries of up to £250 to enable prospective applicants for the PhD programme at Durham University to visit in order to meet and work with a potential supervisor on their research proposal and / or funding application. The bursaries will be awarded on a competitive basis to applicants who have a strong draft proposal in a field covered by the Centre, and have the explicit support of at least one of its members (listed here: www.dcamp.uk/people/), who must be available to work with them during their visit.

Applications should take the form of a draft PhD research proposal (1-2 pages long, including a statement of the significance of the proposed work, research questions and methodology), which should be sent in the first place to the prospective supervisor, who should be requested to send it with his or her support to dcamp@dur.ac.uk

Visits should be planned to take place before the end of December 2018, ahead of the January funding deadlines for the Northern Bridge (www.northernbridge.ac.uk/) and Durham Doctoral Studentships (www.dur.ac.uk/arts.humanities/funding_opportunities/facultydoctoralfunding/), and might be timed to coincide with the University Postgraduate Open Day on 28th November (www.dur.ac.uk/study/pg/visit/opendays/). Visitors (funded or not!) will be welcome to join in with any DCAMP event while they are here.

Attention MA / PhD students! This competition opens on 1st November, with a deadline of 30th November. It is open to anyone registered on a Masters’ or PhD degree (any nationality, any country, any discipline), writing on any aspect of the history of philosophy. Essays may be up to 10,000 words long. Entrants need not be members of the BSHP. The prize fund is £1000. Details: www.bshp.org.uk/funding/gradprize

There is a post-doc. opening with our colleagues in Tübingen – could be for someone working on the Platonic tradition.  Click here for the details. The deadline for applications is 27th July,

We are delighted that we will be welcoming three research fellows hosted by the IAS in the coming year: Dr Anders Dahl Sørensen  (currently Copenhagen) and Dr Myrthe Bartels as JRFs, and Ilaria Ramelli (Milan) as an SRF in April-June. Dr Sørensen  will be working on the ‘Anonymus Iamblichi’, an ancient political text; Dr Bartels (currently Bucharest ) on ‘Plato’s Plato’s Mimetic Approach to Music and its Reception in Renaissance and Baroque Musical Literature’; and Prof. Ramelli on Origen and Plotinus. 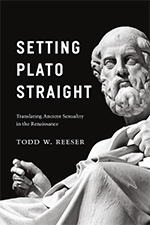 Todd Reeser is Professor of French and Program Director of Gender, Sexuality, and Women’s Studies at the University of Pittsburgh. In Setting Plato Straight, Professor Reeser undertakes the first sustained and comprehensive study of Renaissance textual responses to Platonic same-sex sexuality. Reeser mines an expansive collection of translations, commentaries, and literary sources to study how Renaissance translators transformed ancient eros into non-erotic, non-homosexual relations. He analyzes the interpretive lenses translators employed and the ways in which they read and reread Plato’s texts. In spite of this cleansing, Reeser finds surviving traces of Platonic same-sex sexuality that imply a complicated, recurring process of course-correction—of setting Plato straight.

DCAMP friend Edith Hall will be speaking about ‘Aristotle on True Happiness’ at the Lit&Phil in Newcastle next week, where she features as part of their On Philosophy season. Tuesday, 15th May; 7 p.m.; £4 admission (£10 for the season): free for students/unwaged. Address: The Literary and Philosophical Society, 23 Westgate Road, Newcastle NE1 1SE (just next to the station). Download flyer here.

The 2018 NAAP meeting will be organised in Nottingham by Matt Duncombe (sometime holder of a BA PDF at Durham) on 26th-27th March. Speakers to include Emily Fletcher; James Warren; Jamie Dow; Hannah Laurens and Giulia de Cesaris. Join the NAAP Facebook page for updates

A very warm welcome to Dr Vasilis Politis who joins us this term from TCD as a Senior Research Fellow at the IAS!

Details of the next meeting, on 24th November in Leeds.